Three Days to hit all of the good spots

Every summer we make a trip to Rehoboth Beach for a Board meeting that Aaron is required to attend. On the “way” there and back, we stop at his parents’ house on the New Jersey Shore where the dogs take there own little vacation. This year is no exception. We packed up the Tiguan and headed east. I always have to get a bit creative with vegan eats while we visit these beach towns. They aren’t known for being particularly vegan friendly. I think I do a pretty good job of keeping everyone fed and happy.

As soon as arriving, I always check  Happy Cow just to see what’s around. A restaurant that has never popped up made a surprise appearance. I never know if they added a few vegan options or if they were an undiscovered vegan gem. We headed over to “The Cultured Pearl” and enjoyed some vegan teriyaki bowls with edamame, and ginger salad.

‘The next day we ran into a minor challenge. None of the breakfast restaurants open until 8:00 or 8:30 and Freddie wakes up around 6:00. What do you do with a hungry toddler for two hours? We occupied him the best that we could. And showed up for breakfast with a very cranky Little Man at 8:00.

We have been going to a breakfast/lunch place and juice bar for several years. They always have something that the whole family can enjoy. This place is called “Green Man”.

We order two smoothies and “The Curious George” for Freddie. It is a peanut butter and banana sandwich (we asked them to hold the honey). It comes with more bananas and yellow raisins. I had the Peachy Green Smoothie and he had the Vegan Beast. In the past I have gotten the tofu scramble. It’s good, but I wasn’t feeling a heavy breakfast today.

Around 11:00, my tummy was starting to talk to me. We stopped at a health food store that also appeared on the Happy Cow Ap called “Good News Natural”. We got supplies for snacks and Freddie breakfast foods. We also got some veggie milk for coffee. I had some chickpea salad and plantain chips as a snack to tide me over until lunch. Freddie ate one of his favorite Lemon Poppyseed cookies from The Alternative Baking Co.

We tend to eat lunch on the later side, so at around 1:30, we started to make our way over to “Arena’s Deli”. It’s mostly a sandwich shop with a few salads and of course a beachy drink or six. I got a salad wrap with hummus (making sure to have them leave the cheese off). Freddie just had a few tater tots. I think he was still full from the cookie.

Dinner was a work affair. The hotel puts together a backyard picnic and has the usual grilled meats and mayo salads. We just had a veggie burger and some watermelon. It was a decent dinner.

The next morning I found this stand right off of the boardwalk that makes green smoothies, oatmeal and açaí bowls. Jackpot! It was pretty awesome. 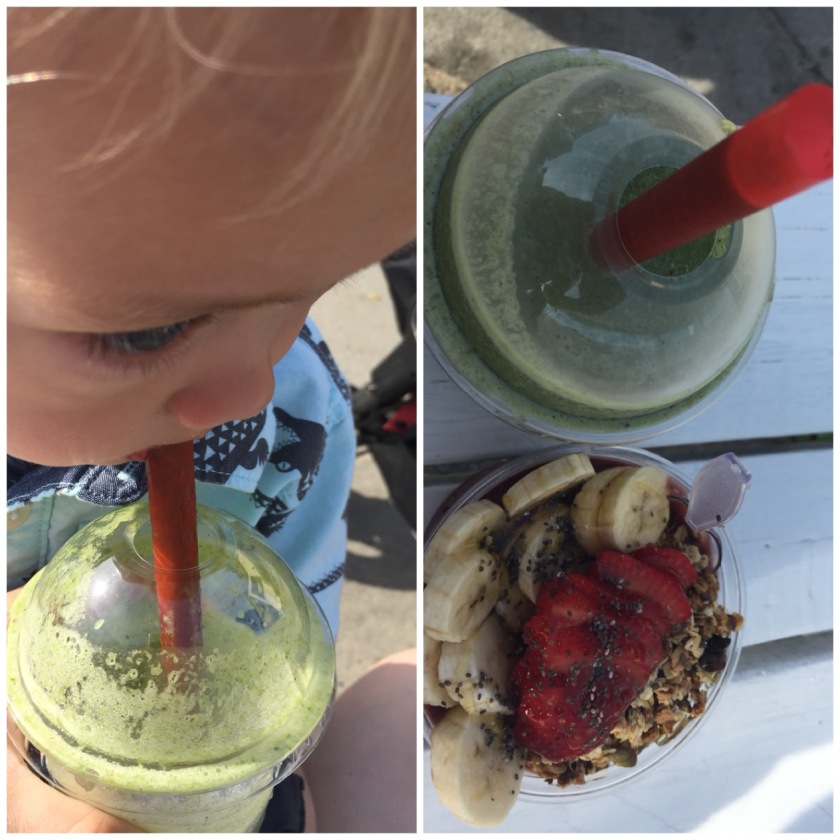 Of course we have been occupying ourselves with plenty of beach time. We’ve also been visiting a lot of the local shops along the main drag. Our favorite so far has been “Browseabout Books”. We grabbed a few items for beach reading and played with every toy that they had.

I would be remiss to not mention “Dogfish Head Brewery and/or Restaurant” when talking about Rehoboth. The last time we were here, the vegan eats there were a bit limited, but now….They have the Beyond Burger! What a delightful surprise! I ordered mine Cali Style (hold the cheese obvi). I also had a beer called Dragon YumYums which was designed in part by The Flaming Lips.

Aaron suggested a place for dinner called “Stingray”. It was super close to “The Cultured Pearl” and boy was it tasty. It’s Asian inspired and the food was surprisingly tasty. I think the waiter didn’t know how to handle Freddie and seemed to be terrified of small children, but he kept trying to give us free stuff. No complaints here Mister. We had some miso soup, salad, dumplings, edamame hummus, crispy wonton chips, and General Tso’s Cauliflower. All of this was accompanied by a tall glass of wine.

I can’t leave out the amazing hotel where we stayed. Thanks Boardwalk Plaza! They hosted Aaron’s board meeting and kept us organized the whole time. Emro and Peanut (the two tropical birds that live in the lobby fascinated Freddie and kept us entertained constantly.

This weekend Pug Daddy’s parents were visiting. That’s right, the INLAWS!!! Noooo! Instead of the usual gathering around the television and addictively watching Fox News like they typically like to do, we decided to take them on a trip to a local farm to enjoy a bit of the Fall Festival season.

I was pondering going to Trax Farm, which is about 30 minutes from our house and located directly off of Route 88. I heard through the daycare-parent grapevine that Trax allows fracking on their property. Yuck!

Instead, we thought that we would try out Simmons Farm. This farm is located in Peters Township, sandwiched in between mega mansions. It’s very spaced out and makes good use of the apple orchards, pumpkin patch, and small stores that are all on the property. I have to say that this farm takes fall decorations very seriously.

Freddie’s favorite part was definitely the small field where the farm had several animals. His favorites were the goats and sheep. 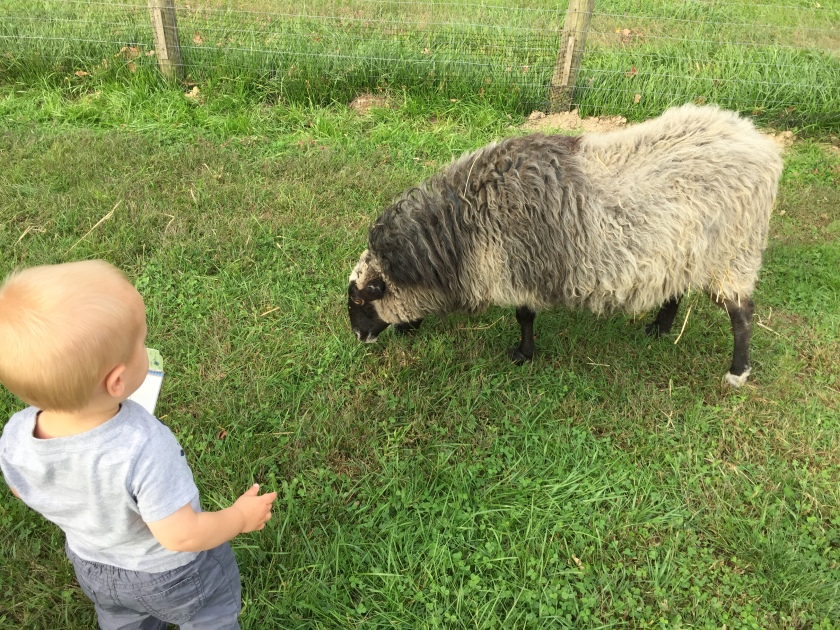 We did pick a few apples and it seemed like the hike to ripe apples was a long and sweaty one. I’m not sure why I thought carrying a bushel of apples, with a toddler, walking uphill, on a 75 degree day, was a good idea.

Overall, Simmons Farm was a very nice trip. It wasn’t too far away and we didn’t have too much trouble with Fall Festival overcrowding. Next time I might take Freddie on a Friday morning when his daycare is having a day off so that we can have more of the farm to ourselves. Excellent option to entertain the in laws.

It’s Fall Festival Time!!! That means corn stalks, apples, and my favorite PUMPKINS! This weekend Pug Daddy, Freddie and I took a drive out to a local orchard; Soergel’s, to take in some of the fall season. Little did we know that it would be 80 degrees outside and so packed full of people that we parked really far away and had to hike across a pumpkin patch just to get to the main part of the festivities. We, of course, had Freddie riding in his aquamarine City Minnie stroller and pushed him “off road style”.

I believe everyone in the Tri State area had the same idea because there were sooo many people there. We popped into the farm stand style store for a quick drink and we had difficulty moving around. Pug Daddy may have accidentally run into a handicapped woman’s walker on accident (oops!). Long lines combined with a ton of children made quickly doing anything very unrealistic.

Despite the uncomfortable heat, and crowds, we did get to see the rows of apple trees, pumpkin patches, and fall wildflowers. We took a few obligatory pictures and popped our heads into a few shops to see what Soergel’s had to offer. I was super excited about the local Arsenal Cider House that was selling jugs of adult cider. It was the perfect drink for a warmer than expected day. I was also pleasantly surprised to find dairy-free ice cream being offered right next to the plain old cow’s milk ice cream. Freddie wasn’t really feelin’ the orchard after about an hour, but a soy root beer float would have been oh so delightful.

We had a pretty nice time overall, but I would also like to check out other fall festivals in the area. I’m hoping that we are able to go to one that isn’t’ quite so congested. Hopefully we will actually try the soy ice cream too.